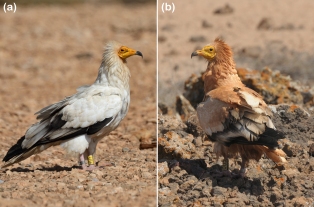 In a recent paper, published in the Scientific Naturalist section of Ecology  (http://onlinelibrary.wiley.com/doi/10.1002/ecy.1840/abstract), we describe for the first time that Egyptian vultures paint themselves with red mud. This peculiar behaviour has so far been only described in its close relative, the Bearded vulture. Observations of this behaviour in the wild are extremely rare, but we managed to obtain exclusive videos of multiple  Egyptian vultures taken mud baths.

The exact function of the behaviour remains so far unclear, but we believe it may serve multiple purposes. Apart from potential sanitary benefits, extensive mud bathing may be used to draw attention from other birds, for example, to impress females during pair formation or to show off during sexual conflicts. Future work should reveal more about their unique mud bathing habit.

Our research has been highlighted by the media worldwide (below a small selection, most sites contain videos): 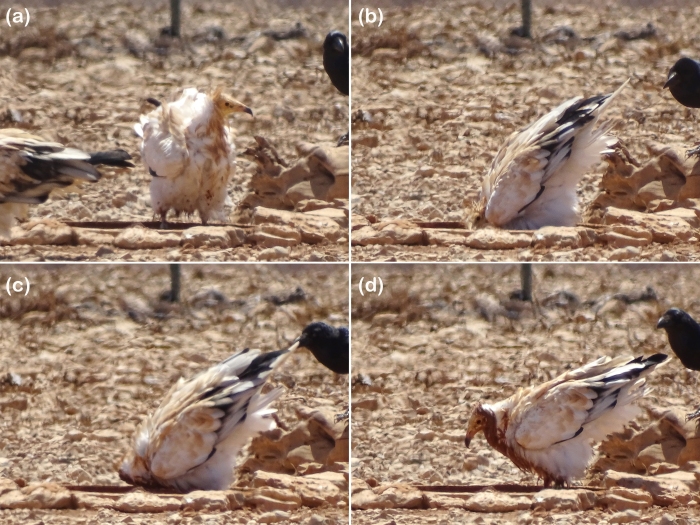 It is well-established that plumage colours are important for avian visual communication and are used to signal social information. Yet, little is known about the ability of birds to modify the expression of plumage colours with exogenous materials after feather development, a phenomenon also known as avian cosmetics. The deliberate staining of feathers with red soil in a social signalling context has so far only been described in the Bearded vulture (Gypaetus barbatus), by other researchers of the EBD (J. Negro and F. Hiraldo). Here, for the first time feather painting behaviour is described in another Old-World scavenger, the Egyptian vulture (Neophron percnopterus). Egyptian vultures are considered endangered worldwide, but 60 breeding pairs and a total population of about 300 individuals still occur on Fuerteventura (Canary Islands, Spain). Two bowls were presented to the birds visiting the main feeding station: one with red soil dissolved in water and one containing only water. A remarkable response was observed with 18 different birds painting themselves with red soil to different degrees and only one bird took a bath in the bowl containing water only. These observations of multiple birds taking mud baths in the wild are the first ever filmed. The exact function of this behaviour is not yet clear, as no evidence was found for a status signalling function as has been suggested for the behaviour in the Bearded vulture. However, little is still known about Egyptian vulture group dynamics and patterns of social relationship within their society and it is possible that the behaviour serves a different social function in this species. Our work adds a new and unusual behaviour to the already impressive behavioural repertoire of Egyptian vultures and opens exciting new opportunities to test alternative hypotheses for the evolution of avian cosmetics or non-vocal communication in birds in general.